Have You Seen the Light?

The have been several times, particularly earlier in the year when the daylight hours were less plentiful, that I had to cut a fun day sailing off because of failing sunlight.  And each time, I thought, "gee, if only I had the nav lights working, I could stretch this out another hour."  Well, now I can!  I finally broke out the wiring kit and now, the lights are working!

I have been able to get Solitude out on the water a healthy number of times since launching her last September.  But they had all been daysailing expeditions, and not fulfilling the boat's true purpose in life: to go cruising.  Taking advantage of a confluence of available time and unusuallylovely spring weather, I decided to remedy that with an overnight trip down to Edmonds.
I ducked out of work a little early on a Friday afternoon to get the adventure under way.   I had loaded most of my gear the night before, so it was just a matter of throwing the last few items in the boat, hitched up, and headed for the water.

No sooner had Solitude hit the water than I was approached by the Coast Guard.  Boating season just started, so the guys were out doing safety boardings.  Solitude passed with flying colours, which is no surprise since, being rather conservative on matters of safety, I've made sure Solitude is well outfitted. 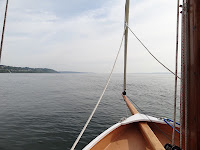 A few more thoughts the Coast Guard.  These guys are amazing.  Their mission is broad, encompassing maritime safety, security, and stewardship.  Most boaters encounter the Coasties acting in their role as protector of lives at sea.   They have great appreciation for the Coast Guard as they are being saved from a sinking boat during a storm, or airlifted to a hospital in a medical emergency.  And yet, when it comes to prevention, a lot of people see a Coast Guard boarding as a hassle.  I don't get it.  Prevention is the first, best step towards safety.  Though the "glamour" of the Coast Guard may be in the high-profile rescues from dangerous conditions, more lives are saved by these guys taking on the sometimes thankless task of safety inspections.  So, if you are boarded, be nice, be cooperative, and say thanks!

Solitude slipped smoothly over small, gentle wind waves on her course south.  The weather had been outstanding for the past two weeks, but this day some high filtered clouds had worked their way in, heralding a coming change.  Making good time, I rounded Point Elliot and crossed the ferry lanes at Mukilteo.  I found out later that I missed seeing a visiting humpback whale in that vicinity by just a few hours.

Following the shoreline, I continued to work farther and farther south, passing "The Shipwreck" and the park at Picnic Point.  Although it is called "The Shipwreck,"  it wasn't a wreck at all, but an old cargo vessel that a man bought years and years ago, beached her, and proceeded to disassemble and scrap her.  Obviously, it was a much bigger project than he could have imagined, and as a result the hulk is still there, years and years later.  I seem to recall that about a year ago the property was subdivided and sold off, presumably by this chap's heirs. 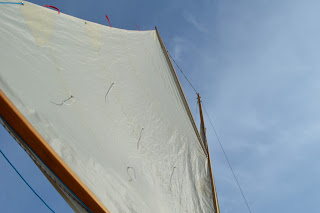 Soon, I was pushing getting past Possession Point at the south end of Whidbey Island.  The waters began to get rougher as I pushed into "bigger water."  Some of this as due to the wind picking up some and the fetch getting greater after losing the protection of Whidbey Island.  A bigger factor, I think, was the complexity of the currents resulting from the changing tide and complex geography...water coming north from Puget Sound and coming south out of Possession Sound all getting mashed together and sucked up and out Admiralty Inlet...a recipe for confusion if ever there was one.

Things had become quite bumpy as the ferry docks at Edmonds came into view.  It had been roughly four hours since leaving home, and I had covered around 20 miles.  It was past dinner time and I was getting hungry, tired, and really looking forward to getting into port.  I was so happy to finally steam around the jetty into marina and up to the guest dock!  And I was so sad to see that the whole of the guest moorage had been reserved!  Now, what's a little strange is that Port of Edmonds only takes reservations for one dock; everything else is supposedly first come, first served.  Yet, here were "Reserved for Dagmar's Yacht Club" signs everywhere.  Well, seeing as the hour was getting late, I found a spot on the guest dock where, if looked at from just the right angle didn't appear reserved, and decided to dock there, "reservations" be darned.  It looked like most of the yacht club boats were already in port, so I figured (correctly as it turned out) that I'd be OK. 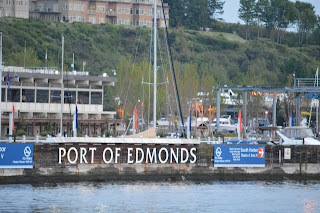 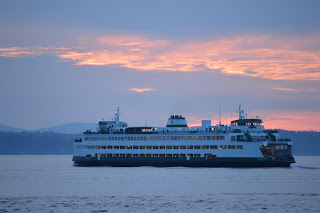 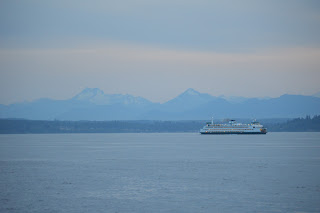 Edmonds is a gorgeous locale.  A relaxing, well kept waterfront, complete with restaurants, a long fishing pier, ferry dock, and a couple of pocket beaches fill out the waterfront.  The Olympics as the ferries crisscross the Sound, illuminated by beautiful sunsets.  Just up from the ferry terminal is "Old Town,"  a cozy, bustling, very walkable little downtown.

It was a gorgeous evening, as I got things squared away aboard Solitude for the evening.  I walked up to Anthony's for an al fresco dinner. 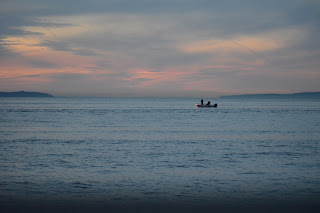 Anthony's is positioned right above the guest dock, and I could watch as people walked by and looked at Solitude, as she bobbed daintily amongst the large power yachts at the guest dock.  Some people took pictures.  I'm still not used to the attention the boat gets.  John Harris sure designed a pretty little eyecatcher. 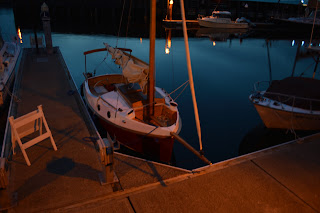 After dinner, I headed down to the fishing pier and watched the sunset.  I then retired to the comfort of Solitude's cabin, were I settled in for a good night's sleep.  Methinks I never sleep so well as when I sleep aboard. 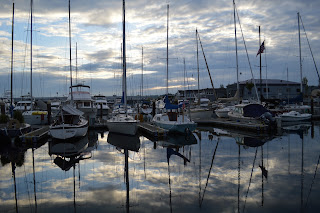 Morning came, and a beautiful morning it was.  Breakfast was at the Waterfront Coffee Company.  Once, while waiting for a ferry, I had the best Mocha I think I had ever had here.  This time, it wasn't nearly as good. Oh well, it did the job. 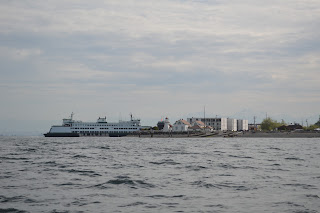 A front was predicted to move in by the evening, but it was still a warm morning and what gray there was in the skies promised to burn off.  I pulled Solitude out of the marina in into somewhat agitated water.  The winds were from the South at 4-7 kts  and were running somewhat counter to the currents, again.  I pointed Solitude northward, straight at a distance Point Elliot, and caught the following sea, sometimes surfing, sometimes pitching.  It wasn't particularly rough out, but the motion was a just little uncomfortable.  Indeed my stomach was starting to feel just a touch queasy about the time I was closing in on Possession Point.  Fortunately, things started smoothing out the deeper I got into Possession Sound, and by the time I rounded Point Elliot, the seas reverted to a glassy calm.

Just north of Mukilteo, a harbor seal popped its head up less than five feet abeam of me.  Just that quick, he was gone, only to reappear seconds later right astern.  I watched, transfixed, as the seal repeated dove and swam right beneath the boat!  (Fortunately, I finally had the presence of mind to grab my camera.) 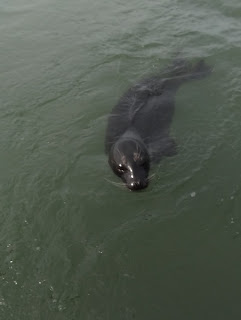 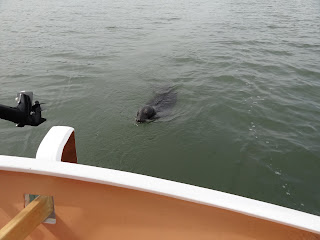 ﻿
This was not the last wildlife I spotted, though.  I spotted a sea lion at one of their favorite hangouts,   one of the channel markers leading into Everett.  I also spotted the usual collection of blue heron, osprey and eagles on the trip up the river.  And then back at the boat ramp, there was a duck with a bunch of ducklings!

In all, it was a great trip.  This is a great little boat for exploring the Sound...and I can't wait until I get another opportunity to take Solitude out for a cruise...maybe even a longer one next time!

A View from the Top

One challenge is writing in putting together one a blog entry is to select appropriate photos.  After the first half dozen times out on the boat, I found that I kept taking, and thus including in the blog, pictures that looked an awful lot like this: 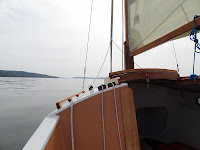 Over and over.  While there is nothing wrong with this photograph, I at least found this rather boring.  So, ever since I've started seeking out new and more adventurous camera angles.  Here's the latest: 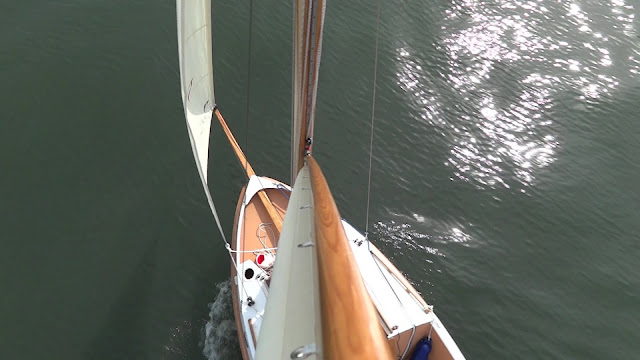 Pretty cool, huh?  Check out the video too (thanks to Mark for giving me a how-to on embedding!):