Every written account detailing the construction of a stitch and glue boat will at some point have an entry titled "It's starting to look like a boat."  There is something magical about way a couple of funny shaped slices of plywood take the form of a boat's hull in just a few hours that causes the builder to involuntarily utter, "it's starting to look like a boat."  The "lookin' like a boat" feeling happens in other forms of boat building, but there it is more gradual.  In stitch 'n glue building, its abrupt, like...WOW!

So, since the last update, I've managed to get most of the lower hull stitched together.  I finished sanding the the hull side panels, and almost immediately set out to start stitching.  I started by dropping in the port bilge panel (recall that starboard panel was already in from a previous burst of enthusiasm).  Stitching well pretty well until I got up to the bow.  Up there the plywood has to make quite a bend in order to give Pocketship her relatively (for a 15' boat with a 6' beam) fine entry.  But with a bit of stubborn effort, it came together. 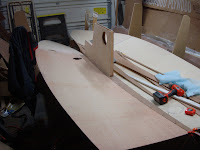 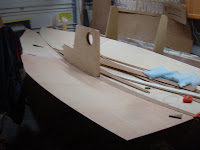 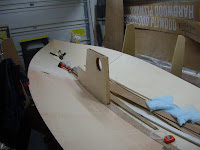 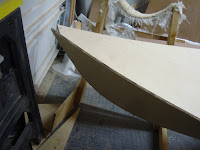 Next up was to stitch in the floor at station #4 (the front of the centerboard trunk).  From there, the hull sides were added, one at a time.  Again, the bow was a bit of a tussle, this time not because of the curvature, but due to interference with the bilge panels.  After a bit of prying and a few imprecations, it too came together. 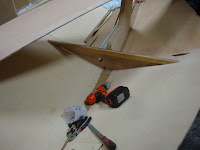 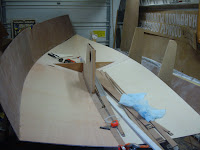 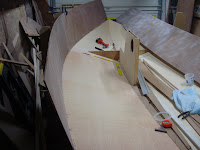 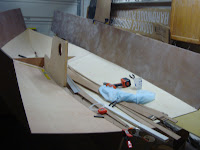 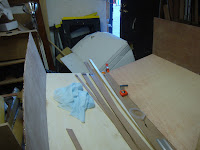 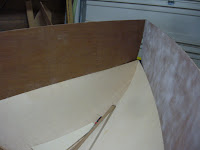 Next up were the transom and bulkheads.   The edges of the transom got a nice bevel to match the angles of the hull.  Getting all the stitches in for the bulkheads and floors requires a bit of bending, stretching, gently climbing around inside the boat, and generally performing precision acts of acrobatic legerdemain.   Just a few more stitches to go.   Then after pushing, pulling, jiggering, jostling, leveling and aligning the hull, it'll be time to move onto the "glue" stage of the stitch 'n glue process. 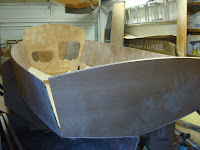 Other projects that have been occupying my time have included 'glassing the centerboard and rudder, and constructing trophies for our monthly soup-making contest at work.   The trophies and centerboard are done, the rudder is still in work.