The other day I as at the local waterfront coffee shop.  It was a typical NW winter day.  Cool, gray, rainy.  No wind to speak of.  I overheard the guy in front of me say that he was about to meet his friends to go sailing.  I have to admit, my soul stirred...sailing, yes, sailing.  But then I looked at look at the weather.  It wasn't a nice day, it really wasn't.  This guy had to be nuts.  Sailing? In the rain?  With no wind?  But, still....mmm...sailing.  I couldn't help but wonder if maybe I am a wimp after all. 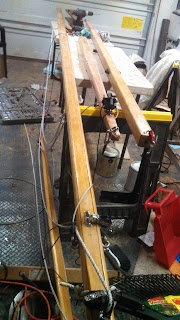 In other news, things are happening in the shop again!  I have done some touchup epoxy work and have started applying more coats of varnish to the spars.  I also got the outboard running again.  When the weather gets nicer or I become less wimpy, I may have a properly finished boat ready and waiting.
Posted by Jon Lee at 7:17 PM No comments:


Sun, wind, weekend.  The boat cover came off and the sails were bent on.  The boat even made it into the water.  This should have been a sailing story.  But it was not to be.

It was a cold, cold day.  I arrived at the boat launch, paid my fees, and set about raising the mast.  Solitude III's tabernacle has always been a fairly tight fit, but with the added cold no reasonable amount of force could get the bottom of the mast to seat all the way into the tabernacle.  I pushed, shoved, kicked and pulled.  Nothing doing.


So, I gave up. Well, all was not lost. I could still drop the boat in the water and have a motorboat adventure. Except the motor wouldn't start..the starter cord would pull through. No reasonable amount of force could get the motor to turn over. As best as I can figure, despite being laid down on the proper side, some oil had made it's way into the cylinder and gave it a bad case of hydrolock.

﻿﻿ I once went to a kayaking class where one guy said he had a three strike rule.  If any three things went wrong on the way to a kayaking trip...malfunctions, forgotten items, weather...he'd turn around and go home the trip.  I only had two strikes, but since they were propulsion-related, I decided to call it off.

I loaded up the boat and took her home.  When I got home, I took a deep breath and decided that the time had finally come to start working on my winter to-do list.  So, I stripped her of her sails and spars and prepared to start a varnish-a-thon.  We're in the middle of a cold snap right now, so the varnish hasn't started flowing yet.

I also pulled the spark plug on the motor, and eventually was able to get the oil cleaned out from the cylinder, so that is good news.

On the bright side, after all this nonsense, I happened to have a crockpot full of jambalaya waiting for me in the kitchen.  Back into construction mode!
Posted by Jon Lee at 3:37 PM No comments: