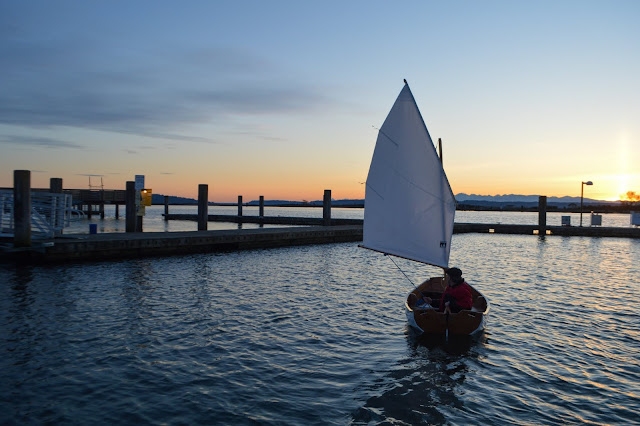 Never pause building a boat when the next step is sanding.  Back in 2015, when I last posted (and worked on) my CLC Eastport Nesting Pram, I took a quick break to work on a few car projects, with every intention of getting back to the back as quickly as possible.  Well, the car project went pretty fast, but then it was summer and who wants to sand a boat during the summer.  And then it was fall, and things got busy, and then it was 2016, 2017, 2018...  Somewhere in there I got distracted and built a kayak too.

I finally got back to the pram in the spring 2019.  I has intended to only finish the boat in a rowing configuration, and skip the sail, but, on a lark, I picked up an Eastport Pram sail.  That got me to the point that I began to move other projects out of the shop to make room to resume work on the pram. 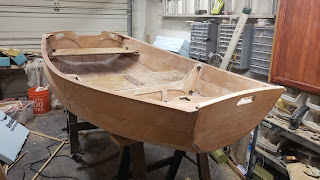 The second event that really got me going was competing in the 2019 Edensaw Boat Building Challenge at the Wooden Boat Festival in Port Townsend.  Over the course of two and a half days, my team built a CLC Jimmy Skiff II, complete with sailing rig.  Getting through that and getting sailing gave me the oomph I needed to resume the Eastport Project in earnest.

When last I reported, the boat was freshly sawn in half.  At this point, the boat requires a whole lot of sanding, and a few coats of epoxy, followed by more sanding.  I started by cleaning up the edges of the hull where the cut was made, sanding the edges of the planks flush with the bulkheads, and filling in any voids in the plank-to-bulkhead joints with thickened epoxy.  I also hit any previously unsealed wood with coats of unthickened epoxy.

Next up, I started finish sanding, but found it slow going.  To keep the momentum up, I switched over to working the sailing rig.  I took a trip over to Edensaw in Port Townsend (partly just an excuse to go to Port Townsend) and picked up several lengths of Sitka spruce for the spars.  Back home, milled them to size, rounded over the edges, and sanded them down.  On PocketShip, the spars received several coats of epoxy before varnish, but since the pram is going to get lighter use, the spars will be stored indoors, and I did not want to sand all that epoxy, I went straight to several coats of varnish.

Although I had not intended to build the sailing version, I have laid out all the plywood parts back when I started the boat, so I actually had the rough cut parts for the rudder and daggerboard, so assembling and shaping these was straightforward.  I had recently replaced the tabernacle on Solitude III with a brand new one (the old one had some unfortunate damage).  I repurpose the 1" thick solid Sapele from one of the sides of the old tabernacle to make the tiller so the pram, so part of Solitude III is now in the pram!

Switching back to the hull, I started sanding.  I have to say, it took entirely too long.  I recognized this, knowing that it was a sign of out of control perfectionism, but could not figure out what it was I was perfectionizing about.  So, I kept sanding, sanding, sanding.

At the Edensaw Boat Building Challenge, one of the other teams (representing the Wooden Boat School), introduced me to their "boat sauce," a mix of 4 parts teak oil and 1 part varnish.  This finish can be rubbed on, does not required sanding between coats, gives a nice satin finish, and can be refreshed just by rubbing on another coat.  I decided to experiment with the on the interior of the Pram.  It worked very well when I applied it to the raw wood on the tiller, but just did not seem to cut it when applied to the epoxy-covered surface of the inside of the pram.  So, I switched over to varnish, ending after multiple coats of gloss and a top coat of satin.


For the exterior of the hull, I decided to go with white -- a hackneyed choice, but it just looks too right on this boat to do anything else.  Painting the outside of the hull was more of a pain than I expected.  First, the highbuild primer took way longer to sand smooth than I remember on PocketShip and kept clogging the sand paper.  I do not know whether this was because the can of primer I was using was really old (dating back to PocketShip), or because the temps in the garage were too cold, or what.  Also, just the act of rolling the paint on was harder than I expected.  In many places there just wasn't enough room for the roller, particularly between the skeg, rub strips, and bottom-most lap.  It is a little strange, but it seems to take less time to paint the large surface of PocketShip's hull than the little hull on the Eastport Pram.

With the paint on, the most enjoyable part of any boat build came, rigging.  Here, all the sanding is behind you, you are in the home stretch, drilling holes, driving screws, lacing sails and reeving rigging.    The best method for lacing lug sails appears to be a controversial topic, though I cannot figure out why.  Mostly on the basis of looks, I went with the half hitch method described here: https://www.storerboatplans.com/tuning/lug-rig-setup/goat-island-skiff-rig-and-rigging-details-for-efficient-lug-sails/

With all this complete, the only thing that remains is getting the boat out on the water. 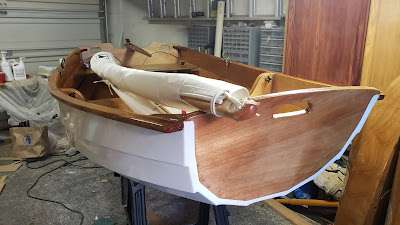 Posted by Jon Lee at 11:46 AM No comments: Links to this post 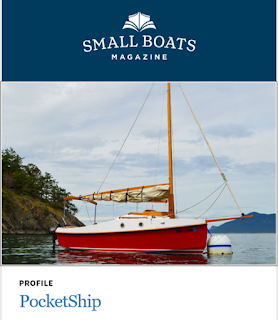 I was recently invited to contribute a review of PocketShip for the March edition of Small Boats Magazine.  Read the full article here:  https://smallboatsmonthly.com/article/pocketship/.
Posted by Jon Lee at 9:39 AM No comments: Links to this post