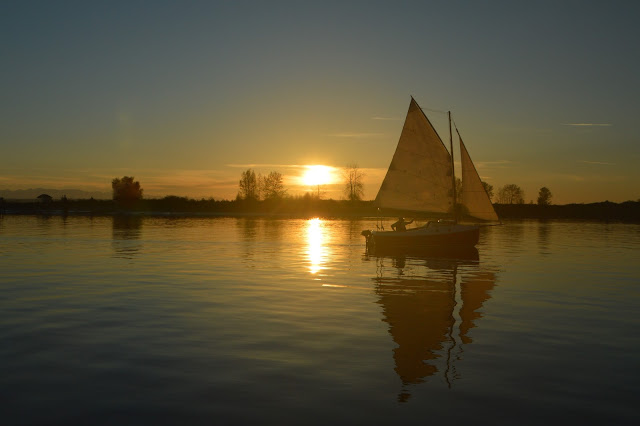 What a relief to finally be able to use Solitude III again for the purpose she was built.  As early as March I was out sailing locally, lingering on the water until late to make it a sunset cruise.  After a winter on the trailer, under a new cover, the new centerboard was still working perfectly.

Another highlight was a day trip across Possession Sound for lunch at Langley on Whidbey Island.  Langley is a beautiful little town, with a nice marina and plentiful shops and restaurants.  Little did I know, however, that crabbing season was on, and the harbormaster would refuse to grant me even an hour of transient moorage.  Instead, he suggested that I anchor out.


I bought an anchor when I was first fitting out Solitude, but had never had cause to use it – time to see if everything I had read about using the anchor would work in practice.  I eased Solitude in to the anchorage and dropped the hook.  I backed it in and satisfied myself that it was holding.  It seemed so…I guess I got it right the first time.

Now for the next bit of unused kit.  Some time ago, I had picked up a little two-man rubber raft on sale.  It sat since then, wedged in a little space in the cabin underneath the foo
twell.  I crawled unded, retrieved the unopened box, and hauled it on deck.  Within a few minutes, a little dingy was floating aside the mothership.  I cautiously lowered myself over Solitude’s side, and rowed ashore.


After lunch, I returned to the boat, stowed the raft, pulled up the anchor and took off.  I set full sail immediately on leaving Langley and took off into the gentle wind.  On the way, the wind started picking up and I the sailing was actually quite spirited off the north end of Hat Island…what a wonderful little trip!
Posted by Jon Lee at 8:00 PM